An impactful visual, like good storytelling, is worth more than a mere thousand words. American Factory joins the films Shift Change, Weconomics and Don’t Give Up Your Voice in showcasing the rising hopeful-good, the very bad and the extremely ugly in the global quest, beyond borders, markets and silos for an aspirational future of work where all stakeholder workers have a voice and a vote through collective organizing, workplace democracy and inter-generational wealth through an equity share.

“Shift Change” is a reflection of how 60+ years of Mondragon principles and practices are impacting worker-owned and cooperative businesses across the United States, launched in time for the 2012 International Year of the Cooperative. In collaboration with Mondragon Cooperative Corporation, Melissa and Mark gained unusual filming access to the Mondragon cooperative ecosystem. “Shift Change” was shown hundreds of times throughout the entire U.S. and played non-stop on many public broadcasting stations (PBS). Then-USW International President Leo Gerard and 1worker1vote hosted a showing at the AFL-CIO headquarters in Washington, D.C. to over 200 attendees in the Samuel Gompers hall. 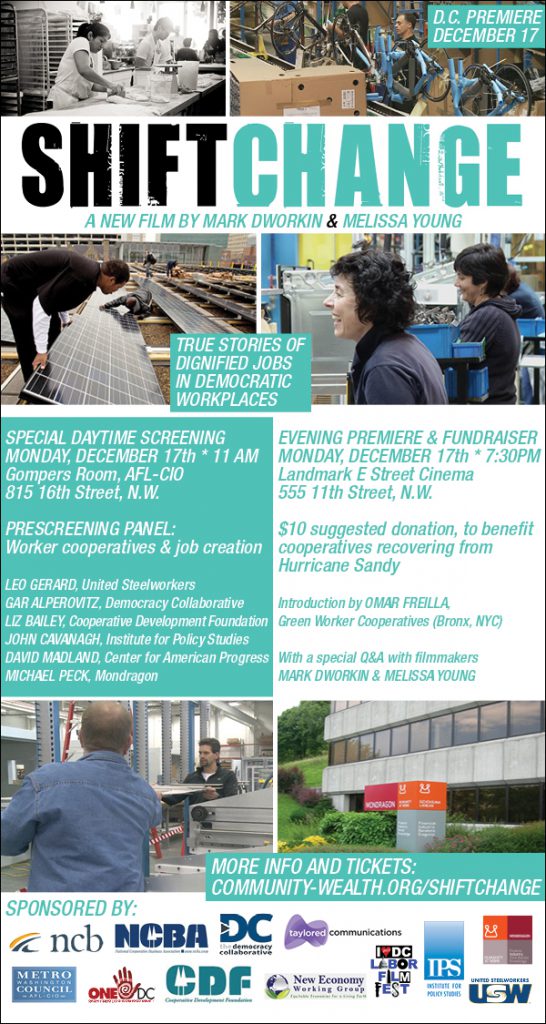 Spain’s Basque Region’s approach to a cooperative ecosystem infrastructure (over 1300 cooperatives including the 105 Mondragon Tier I/II/III cooperative ecosystem) is key to why it scores best on the global GINI Index measuring structural inequalities (while maintaining a tax structure more comparable to many U.S. coastal blue states than do Scandinavian countries that score equally well on GINI).

Weconomics: Italy [2016] – 19 min.  The Emilia-Romagna region of northern Italy has one of the highest concentrations of cooperative businesses in the developed world.  The first cooperatives formed in the 1860’s and today collectively represent 30% of local GNP.  The capital, Bologna, is an industrial powerhouse, where prosperity is widely shared, and cooperatives of teachers and social workers play a key role in providing government services. Reel Work, UN Association, World Community, Taiwan International Labor Festivals, Global Studies Association conference.·

Mark’s and Melissa’s “DON’T GIVE UP YOUR VOICE” focuses on the bold and creative resistance to Argentina’s President Macri as a metaphor for resistance elsewhere. Recently, in electoral results that presage Argentina’s upcoming national elections, a nationwide primary saw Macri’s forces trounced nationwide with an overwhelming margin of victory for organized labor, and especially worker coops who have been key players in the resistance. The inside view of the Argentine resistance in “DON’T GIVE UP YOUR VOICE”, can offer both understanding and inspiration to those advocating for similar results across borders, markets and silos.