Why Cooperatives Unionize? Why Unions Cooperativize? 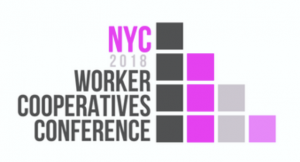 Following are my closing remarks on the union co-op movement vision:

“Thank you, panelists, for this teachable moment. When the Vital Brooklyn movement you are leading executes as envisioned – you will bequeath a transformational healthcare template that will rock America’s oligarchic healthcare sector, one-sixth of our GDP. “Made in New York City” ownership standards and practices by local Central Brooklyn community activists and SEIU 1199 will show the nation how to take back the peoples’ unalienable right to equal access to the best and most affordable healthcare from ruthless insurance, pharmaceutical and care-provider oligarchies who would commoditize our lives and how and why we die.

A new UN report states that the USA has the highest income inequality of all Western nations – 40 million Americans live in poverty including 13.3 million children.

The Centers for Disease Control reported last week that USA suicide rates increased in 49 states between 1999 and 2016 across sex, age, race and ethnicity lines. In half of all states, the increase was 30 percent or more. Suicide is now the10th leading cause of death overall in America, and the second leading cause of death for Millennials and Generation Z between the ages of 10 and 34. It’s not just Anthony Bourdain, Kate Spade and other, mostly white celebrities – the forces of depression, regression and repression spare no one. Actuarial tables in America show that how long you live depends on where you live and who you live with more than how you want to live.

Meanwhile the top one-tenth percent holds nearly 40 percent of our nation’s wealth. And despite the canned publicity barrage, they’re not letting it go and when they give it away it’s with their strings attached. Anyone who has tried to speak truth to philanthropic power knows this.

Permanent, neighborhood-based, hand-me-down wage stagnation means that the kind of capitalism practiced today is not going to solve our biggest problems. We need better originating structures embodying more self-reliance, more self-fulfillment, more workplace democracy, and more participation in the creation of equity each of us helps to generate.

Today’s culturally and morally incorrect embedded racism and socioeconomic inequalities produce statistics like zero percent wealth aggregation levels for communities of color and five-thousand dead in Puerto Rico from deliberate neglect after last year’s Superstorm Maria.   We must refuse to allow these spiritually horrific numbers on any values scale to add up and define our lives because when we do the math we understand that this is not the story we can allow America to tell.

Look around our wall-to-wall attended CUNY Law School conference center today… what do we see? Metaphor, Originality, Innovation, “E Pluribus Unum” – our growing nationwide union-coop movement as one out of many – but also letting “a thousand flowers bloom” individually on the path to full self-actualization and workplace freedom. 1worker1vote.org calls this “Solidarity Synergy,” where numbers do not add-up linearly because union coop power-paradigms shift engaged majorities from victims to owners. The Vital Brooklyn movement centered around the “Save Interfaith Coalition” and Interfaith Hospital is living proof right here, right now.

We see the future of the nationwide union-coop movement in innovating hybrid ownership models, starting with the union co-op template, in every imaginable workplace sector – the only limits are our own imaginations and will to deliver.

Over 30 unions in multiple cities collaborate in some form with us – studio artists and other gig economy workers forming cooperatives with their union, car washes in LA with the United Steelworkers who co-designed our Mondragon-inspired union co-op model, green taxi drivers in Denver with the Communications Workers of America, Lobstermen (and women) in Maine with the International Machinist Union, Cooperative healthcare workers in New York City with SEIU, organic farms and food desert stores in Cincinnati with the U.S. Food and Commercial Workers union, print shops, technology worker coops seeking to unionize, energy efficiency union co-ops, sustainable and union-facilitated affordable cooperative housing by the people – for the people – of the people… and we’re just getting started.

Patience and perseverance help because It takes a generation.  Mondragon’s founding village priest, Jose Maria Arizmendiarrieta, spent 15 years preaching collaboration and inter-cooperation to his constituents before the first Mondragon coop appeared in the early 1950s. There are no quick-hits in this movement, but we are inexorably aggregating singles and doubles, helping “humanity at work” to put itself on first base and deploy marketplace-proven best practices to cross home plate.

The seven, internationally recognized cooperative principles that inform every cooperative no matter what sector or type are necessary but not sufficient. The Mondragon cooperative ecosystem adds three to arrive at ten principles with the two most important additions in my view being the sovereignty of labor and the important but subordinate role of capital.

In today’s America, everyone is out to assert their brands over our lives, to commoditize us, to reduce us to “consumption nodes” within their economic models. We become the socioeconomic cast-offs, children of lesser gods who don’t qualify for full membership in today’s mega-bully-pulpit Prosperity Gospel sermons and tweets.

The saying we’re using these days within 1worker1vote, a New York state-registered, hybrid model economic development catalyst and movement, describes both humility in the face of the task ahead and the incredible significance of just one outstretched hand – “Not the Oyster, Not the Pearl, but yes, the grain of sand.”

Fellow human grains of sand, participating today –  we are in the movement tire-creation business so that others may kick them – people need to “kick our union coop performance tires,” to understand the metrics and confirm deep down inside that this is real and worth the commitment of their sacred lives.

The 1worker1vote future is “learning by doing” education and training, deep accelerator immersion, a new approach to union-coop and worker coop conversions, and legislative collaboration with the American Sustainable Business Council as our movement lobby to achieve tax policy parity for union co-ops and worker coops on the levels that ESOPs currently enjoy. Why shouldn’t potential worker-owners and their hosting communities access the same rights to select the ownership structure that’s best for them just as investors do?

Remember our rules of engagement: always envision the ecosystem, always work bottom-up by personal example & never top-down by hand-off, and never, ever allow anyone, anything or any place to commoditize the sacred uniqueness of your lives.

Thank you, movement advocates, for inter-communicating with us. Thank you, panelists Bruce, Keith, Shaywaal and the visionary Roger Green for leading us. Thank you, Carmen and CUNY Law School’s Community Economic Development Clinic team, a 1worker1vote co-founder, and the NYC Network of Worker Cooperatives, for including us and allowing this event to come together in this fine way.

Blessings on this vibrantly engaged house.