Starting with education the “Mondragón Way”, the U.K.’s developing Co-op University and the “learning by doing” union co-op curriculum developed by CUNY Law School’s Community Economic Development Clinic (CEDC) and the Cincinnati Union Cooperative Initiative’s “CoopU” play a vital, enabling role. “Humanity at Work” to quote the Mondragón slogan means that Labor is Sovereign. Capital is subordinate to and supportive of Labor. The principle feature of the Mondragón experience is prioritizing sustainable, quality employment as a means and an end. Capital supports the labor force rather than the labor force supporting capital. Money goes to the employees who are also worker owners, not distant investors or shareholders. The Mondragón ecosystem experience is about people and community where full employment is a right sustained socially through solidarity and economically through business success. It’s a practical and pragmatic reality not a dream.

The work at Co-ops UK since 2013 on social co-operatives for all forms of social care (home care, child care, community health, housing disrepair, education, jobs for ex-offenders, etc.) and with the Wales Co-operative Centre have generated policy guidance, reports, legal requirements in a new law in Wales for social services and producing this work developed close links with Italian, Québécois and Japanese social co-op leaders.

In the UK, public policy shutdown (exacerbated by Brexit) and savage cuts in local government budgets have blocked continued investment in public services. In Wales, with a Labour Minister for social services who understands the co-operative economy development message, a small development fund has been secured as a start towards a re-imagined co-operative economy. The need for change runs deep. With an ageing population, and an ever increasing crisis in the U.K. National Health Service, these ideas require targeted social investment and public-co-op partnerships, as was the case in Italy with the passage of the Social Co-operatives law in 1991 and indeed in the previous decade in Emilia Romagna to prove that social co-operatives work and create good jobs, to do what FDR did in the 20th century, to advance trade unionism and co-op economy solutions.

The social co-op advocacy work pursued by groups of social innovators in the U.K. supported by Co-ops UK and small development networks in England and Wales have influenced the U.K. Labour Party to think more about co-operative solutions and economic democracy. A Community Wealth Building Unit now exists as part of the Labour Party apparatus and ideas of how to transfer ownership and give control to workers are being discussed and assimilated into national policy. As in Italy and Quebec, a full range of democratic solutions are emerging involving mixed stakeholder co-ops that include both worker and service user ownership and control. The Co-operative Party, that works in partnership with the Labour Party, reviewed the available work on social co-operatives and wrote up a definitive report a couple of years ago. More recently, a report commissioned by the Co-operative Party and produced by New Economics Foundation, ‘Co-operatives Unleashed’, describes the co-operative development eco-systems that need to be federated (local, regional and national tiers aligned) to double the size of the co-op economy in the U.K.

As already mentioned, this important work has been followed up and further developed and embedded through the creation of the Labour Party’s Community Wealth Building Unit consisting of academics, politicians and union members advising the Leader of the Opposition, and the joint Labour/Co-op Party implementation group. This work, inspired by the success of the UK Preston Model, is on-going. Local authorities  governed by the Labour Party are already implementing some of the lessons of the Preston Model. Should the Labour Party become the party of national government, a transformation of the socio-economic framework of the country beckons. 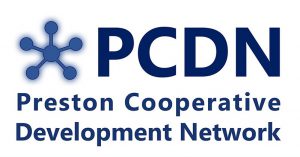 Julian Manley, Chair of the Preston Cooperative Development Network and Social Innovation Manager at the University of Central Lancashire in Preston notes that the ‘hidden’ and over-arching elements of the Preston Model are key to the attention it has garnered. These include:

In London, Bristol, Devon & Cornwall, Wales, Greater Manchester and Preston there is work underway to set up regional co-operative and community banks that can play their part in the vital social investment infrastructure, not by displacing credit unions and community development finance but enabling these forms of local social investment to be key delivery partners. Current grassroots work in the U.S.A. for the LA Public Bank and New York Public Bank are also talking about this democratic financing networks model. Mark Drakeford, Welsh Labour First Minister and the Welsh government’s chief economist, has responded positively to the regional co-op bank plan for Wales and in the wake of the two public meetings held on these plans Welsh local government interest is growing. In Preston, the development of a community and co-operative bank is well under way, with contributions from the local Anchor Institutions and the reinvestment of Pension Funds as key.

In Wales, the Mutuals Alliance has been established since 2016. The Alliance has an annual conference that brings together grassroots economic democracy actors in the fields of co-op care services, co-op housing and community land, co-op and community energy and much more. The Wales Co-op Centre is backing the work on social co-ops and the public bank, and co-ordinates support for the Mutuals Alliance.

Activities in Greater Manchester, Preston and Rochdale are very similar to what is happening in Wales. Andy Burnham, the Mayor of Greater Manchester, gave a strong speech at the end of the Co-op College annual conference last spring offering an open door to proposals for co-operative solutions to both social care and the housing crisis.

A century ago there were 1,400 local co-op societies in the UK that were networks locally of all the different types of co-ops. Consequently, in the 1920s, the co-op economy accounted for almost 30% of the retail sector. They acted then as an alternative chamber of commerce. What is happening with the Co-operative Economics Alliance in New York, with CUCI in Cincinnati, with the PCDN in Preston, and all over Wales is a potential reincarnation of such co-operative economy nodal or nexus points to foster density and solidarity and  mutual aid at the human level of social economic needs. This coming together will lead to a reinvigoration of a new humanistic and ecologically oriented politics and Preston is showing us the way.

Union co-ops hold prime importance for a fairer, equal and stakeholder U.K. ecosystem. Approximately half of the social co-operatives in Italy have strong trade union links and collective bargaining agreements. The challenge is to build a home-grown co-operative economy localized in any and each country. Clearing the space for social innovation is a political economic struggle which is why the support from leading national U.K. politicians such as Jeremy Corby & John McDonnell for the Preston work is such a vital breakthrough.

Now, working with Preston and 1worker1vote.org, our U.K./U.S.A.collaboration intends to achieve a replication of the U.S. union co-op model in the UK. The “Union Co-ops: UK” Concept Paper sent out recently to several trade union leaders has received a growing number of positive replies to our request that they join the steering group and attend the first meetings this year. As we speak, meetings are taking place in Preston and in the Manchester region to present the union co-op model.

Circling back to education, the Co-operative College, a sister organisation of Co-ops UK, is building a Co-operative University that can feed  Preston’s projected Co-operative Education Centre (also a co-op) and create a federation of educational centres around the country to support cooperative education. The idea is that the Co-operative College will be able to accredit a part-time BA in Co-operative Education which Preston would be part of. The Preston Centre would also provide a Foundation course that could be stand alone in order to join with the Union education schemes, more skills and apprenticeship based. This could be part of ‘inter-cooperation’ between various educational sites to provide this education and the Co-operative College will accredit the courses. In addition, the University of Central Lancashire, already the biggest Anchor Institution in Preston in terms of finance, is becoming ever more involved in the Preston Model. The University is placing a greater emphasis in choosing suppliers who are both local and can provide social value: more local jobs, apprenticeships; less damage to the environment. Its Business hub, Propeller, is getting ready to join forces with the PCDN to provide co-operative education within the university itself leading to the development of worker owned co-operatives for Preston and the development of local community democracy.

Co-operative values are also community and university values that transcend frontiers and oceans. Hybrid shared ownership models like the union co-op template serve to bring parallel communities such as unions and cooperatives together. The 1worker1vote transatlantic movement honors the origins of the modern co-op movement that began with the 1840s Rochdale principles in Manchester/U.K. as did industrial unionization. Cooperatives and unions evolved separately but today’s extreme solidarity deficit imperatives compel renewing and scaling the union co-op bond. The emerging U.K.-U.S.A. union co-op model incentivizes an urgent, across borders, civil society cultural intervention at scale to bind high-impact union solidarity with the democratic power of cooperative ownership giving more working people genuine control over their economic lives. Democracy at work is or should be available to all. These models of co-operation exist as contributions to a new socio-economic reality. They can also serve to reduce inequality and to serve those in distressed and undeserved communities.

The future of co-operativism is at our doorstep.

Download “a short history of co-operation and mutuality” in English or Spanish.