Obdurately like a species voting for its own extinction, American Democracy self-deports its founding values in exchange for a massive solidarity deficit with well-defined causes and victims but some emerging remedies. Four categories cry out for a national conversation this Labor Day: decaying civic culture, shareholders with more rights than stakeholders, comparative actuarial tables based on race and economic class, and what the decline in private sector unionism hath wrought.

First, American culture is “lost in translation” between “I built it all myself” and “it takes a village,” crisscrossed by victims of sustained economic-class based violence with unmistakable racial underpinnings. A deep feeling of “no country for my people” oscillates between emerging opposites such as the “Black Lives Matter” movement and self-proclaimed downwardly mobile, mostly white male, “Second Amendment people.” 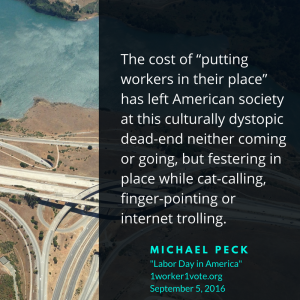 Singed by the fires of this populism inferno, America betrays its fragile civic balance evolving from a nation conceived, built and ceded by voluntary immigrants, involuntary slaves and assassinated indigenous peoples, re-fused into one and re-blown to bits through a bloody civil war, Great Depression, two World Wars, Korea, Vietnam, the Civil Rights movement, Iraq, Afghanistan and recent 2008 Great Recession. Only by continuously melding and melting such vastly different cultural touchstones, experiences and outcomes into a solidarity-infused national equation can something good and fair for someone equal something just as good and fair for someone else.

Second, American corporations daily demonstrate their privileged tax obligations, wealth aggregation and bankruptcy protection benefits at the expense of those condemned to pay the public tab. More scalable and untouchable, U.S. Supreme Court-sanctioned corporate “personhood rights” trump any so-called “unalienable rights” that actual U.S. citizen-persons still can claim. Wouldn’t it be revealing if every single U.S. taxpayer self-incorporated and then decided through online corporate inversion strategies to pay taxes only in the countries with the lowest rates? How many individuals get charged, indicted and then benefit from the option to pay a fine without admitting guilt? What individual is “too big to fail,” Gulliver finally being tied down by all those Lilliputians?

Fourth, traditional solidarity-enhancing institutions are disappearing. New studies described in The Atlantic (“Fewer Unions, Lower Pay for Everybody”) find that union decline (from 34 percent to 10 percent in private sector male union membership since the late 1970s) has led to greater income inequality. Specifically, expanded union membership could produce notable upward mobility for people without college degrees. According to a 2013 Bloomberg analysis, “a majority of American workers would join a union if given the opportunity” and if “organized labor were as strong today as it was in the late 1970s, nonunion men without a high-school diploma would be earning 9 percent more.” Dues-paying formulas have not kept pace with GIG Economy, artificial intelligence, 3D printing, and robotics everywhere job descriptions while union organizing and collective bargaining in the United States “have not kept pace with other advanced democracies” even though unions have proven capable of boosting minority wages.

More than existential angst, our very real fear (to quote my daughter, Tatiana), is that “we’re evolving into digital versions of ourselves and wonder if we’ll get to the point where we implode, where everything we create is so much more capable than our physical selves, that we just self-obsolesce.” Technology swagger aside, apps aren’t curing homelessness, systemic poverty, inequalities and racism, downward mobility and a loss of generational aspiration, the lack of love, fear of aging, inability to preview the future, obsessing about mistakes, feeling whole or part of a whole community, and doing something more lasting than just consuming, producing waste, emitting noise, digesting, and Tinder-hooking up and in.

The cost of “putting workers in their place” has left American society at this culturally dystopic dead-end neither coming or going, but festering in place while cat-calling, finger-pointing or internet trolling. Neither the politics nor sports arenas, campuses, parades, shareholder meetings, churches, temples, mosques, playgrounds, airports, casinos, wide open spaces or adjacent front yards are bringing Americans together compared to the Facebooks, Amazons, and Googles who slice-dice-pigeonhole us apart.

It’s time to return to the structures and modalities invented the last time we felt like this. The modern co-op movement has its origins in the 1840s Rochdale principles in Manchester, UK, where industrial unionization also began. Unions bring solidarity while worker cooperatives bring market-centric workplace democracy. Connecting both into a hybrid union co-op formula eclectically harvests the best of worker-owned and governed ecosystems for the people themselves and by those very same people.

Rescuing America’s cultural ecosystem means going back to the beginning when coops and unions formed concurrently to ward off the inequality evils of the then emerging Industrial Age. Now, in the “Sharing Economy” Age, Task Rabbit and Amazon Turk workers find themselves increasingly involuntarily shared and commoditized again without recourse or benefits.

Even more pernicious, inequality menaces peculiar to the GIG Economy are beginning to surface in GINI Index bottom-feeders such as the United States robbing the American people of social cohesion, basic rights, aspirational destinies and human dignity. While cooperatives and unions developed simultaneously 176 years ago as socioeconomic and cultural antidotes, today, “humanity at work” catalysts such as 1worker1vote.org renew, convene and extend the union co-op bond for the common good.

6 comments for “Labor Day in America”