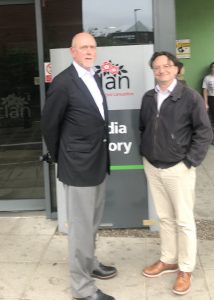 1worker1vote advisory board member, Dr. Steve Sleigh, with Dr. Julian Manley, Chair of Preston/UK’s Cooperative Development Network (PCDN) inspired by Mondragon’s cooperative ecosystem, outside of the University of Central Lancashire following a hybrid shared ownership model finance roundtable hosted by Julian and the PCDN on“Pension Funds and the value creation conversation,” featuring Steve and Cllr Martyn Rawlinson on “The use of Pension funds in Preston” together with a general discussion by attendees. – Friday, April 26th – Preston/UK

“A real eye-opener in terms of our local agenda and how we might progress. There will be further discussions on these ideas no doubt.”  – Cllr Martyn Rawlinson (Preston City Councilmember)

Julian: “Very many thanks for your visit to the Preston Cooperative Development Network yesterday and your many insights and inspiring ideas during our Preston/1worker1vote roundtable. I know in particular that the more finance-knowledgeable people who attended found the visit especially illuminating, stating in fact that this was one of the most fruitful meetings in a long while. It would be great if we could maintain a contact and trace developments and ideas together. As I said, we are hoping to turn a four floor office building in the centre of Preston, the People’s Production Lab, into a home for the Co-operative Education Centre and future co-operatives. Your thoughts about using pension fund investment and concentrating on the building rather than the co-operatives as a negotiating strategy are very interesting for us right now, as well as valuable insights about how to support our development of the Co-operative Bank, scheduled for 2 years down the line. Your union experience was also interesting to us, and it’s really thanks to 1worker1vote’s inspirational leadership in this area that we are directly working hard with unions to create our first union coop within the next two years. By combining union attention with financial realities and the social with the viable, 1worker1vote is a living example of how this can be done. Our project here is not to fit in with capitalism, but to create a socio-economic transformation of the way we live and work. Having said that, I took away a couple of great thoughts which are useful on a more general philosophical approach: firstly (and this is the Mondragón way) we must be practical and pragmatic above all. There are no principles without financial success. And secondly, what is common among us is that we need to be creative to be innovative and to think out of the box, and actually that’s not as difficult as it sounds, it just needs facilitation, and this is one of our main tasks. People who have been rooted in habit and tradition need help to see things differently, and differently is often rather obvious, or ‘smart’, as you put it. Helping people to think out of the box has been one of the main features of the Preston Model.”

Steve: “Thanks Julian. I really enjoyed the conversation, all of your points are good ones. Last night I had dinner with an old friend who is now a CEO of a midsized UK company. He led off the conversation with a discourse on inequality and the need for business to do more for society!  We are witnessing this conversation more and more and are committed to finding ways to make investments that are people first, profit second.  My real point about Mondragon is that it is unique in the world today, but offers a blueprint for many tomorrows waiting to be customized across borders. Each economically self-empowering geography needs to create a localized path that works for local stakeholders, so lots to learn from our friends in the Basque Country. UK pension schemes are beginning to understand the benefits of deepened and widened hybrid shared equity and participation models, the momentum is just beginning!”

The Preston/UK model in a much larger UK-wide and transnational policy context:

“Academics supporting Labour leader Jeremy Corbyn will on Thursday launch a think-tank designed to flesh out the bones of the UK opposition party’s economic agenda. The new group, Common Wealth, said it wanted to design new “ownership models” for a more sustainable future economy. This would involve not only the nationalisation of utility companies including water, power distribution and the Royal Mail, but also greater use of co-operatives and more public involvement in ownership models. Ed Miliband, who was leader of the Labour party before Mr Corbyn, will sit on the new group’s advisory board. Its founder, Mathew Lawrence, an influential figure in leftwing Labour circles, was the co-author of the “inclusive ownership fund” idea, which has since been adopted by shadow chancellor John McDonnell. This controversial policy involves the transfer of 10 per cent of the shares in all big UK-based companies, worth hundreds of billions of pounds, to their workers over a decade. While workers would receive dividends of up to £500 a year, any payments over that threshold would be diverted to the state coffers. Those behind the new group believe that it fills a vacuum given the relative lack of think-tanks in Britain on the left of politics while there is a plethora of centrist and rightwing research groups. Only a handful of think-tanks enjoy close relations with the Labour party, including the centre-left IPPR and the New Economics Foundation. Pluralistic and democratic models of ownership will be vital to moving beyond neoliberalism,” Mathew Lawrence, founder of Common Wealth Mr Lawrence is a former senior research fellow on the IPPR’s Commission on Economic Justice, which last year issued an influential report by figures from business, trade unions, academics and Justin Welby, the Archbishop of Canterbury, calling for higher wages, greater government investment and workers on boards. Mr Lawrence came up with the inclusive ownership fund in a paper by NEF called “Co-operatives Unleashed” published in July last year. The policy was adopted by Mr McDonnell during the Labour conference in late September in one of the biggest surprises of the event. He said that Common Wealth would focus on “transforming and democratising” the ownership of business, finance, data and digital technologies, the environment and land. Mr McDonnell said he “warmly welcomed” the launch of the think-tank, saying it would “help us broaden our imaginations and build up the evidence base for our policies.” Recommended UK business & economy Treasury could reap £5.9bn annually from Labour’s share plan The organisation will also seek to provide the intellectual framework for a UK version of the “Green New Deal” in the US backed by leftwing Democrats, including Alexandria Ocasio-Cortez. Forthcoming publications by Common Wealth in the months ahead include a report into inequalities in land ownership, a plan for reshaping ownership of digital infrastructure and a plan for democratising corporate ownership. Mr Lawrence said the question of who owned and controlled the wealth of society was a fundamental question in 2019. “Just as nationalisation underpinned the postwar consensus and privatisation drove Thatcherism, new pluralistic and democratic models of ownership will be vital to moving beyond neoliberalism,” he said. Meanwhile, Labour will on Thursday pledge £1.3bn of new funding to reverse cuts made to 3,000 bus routes since 2010 under the Tory-led government. The money will be funded by switching £7.1bn of vehicle excise duty, which is currently scheduled to be allocated to a new roads fund from 2020-21. The road-building planned by the current government would under Labour instead be funded through capital borrowing”.

1worker1vote is an ASBC member co-leading the ASBC “Ownership4All” campaign.

← Legal Cannabis – A Blueprint from Persecution to Restitution through Local Stakeholders as Shareholders
Are We All “Wee” Workers? →