How Inequalities Unite to Divide

Being a divided nation is nothing new. It’s part of America’s historical DNA beginning with pioneers, settlers and colonialists against Native Americans, the British, French and Spanish against each other, Tories against Revolutionaries in 1776, and North against South from 1860 – 1864, with strong cultural ramifications felt keenly today in emerging movements such as Black Lives Matter. America, true to its bloody and democratic founding, is a country predicated on unalienable rights and responsibilities to be shared equally among all citizens initially excluding those who were brought here as property and Native American Indian tribes who were driven from their lands and culture by force of arms. What’s missing from today’s melting pot formula is any credible aspirational promise, social platform and economic structure that can unite both legacy and emerging divides.

Post-Great Recession 2008, America’s rising structural inequality triangle (mobility, opportunity and wealth) began to be viewed as an encroaching sociopolitical reality (starting with irrefutable evidence provided by Thomas Piketty’s “Capitalism in the 21st Century” best-seller). The Piketty themes frame the current inequality debate in 2016 presidential campaign positions. The unassailable inequality fact is that the richest 85 people in the world have as much wealth as the poorest 3.5 billion, or half the world’s population. In the USA, 400 individuals own more wealth than the bottom 150 million – this is a standard line in any Bernie Sanders campaign appearance.

Pervasive, unchecked and pernicious, inequality has become a mortal economic and democratic cancer threatening America’s civic soul while also self-positioning to strangle future marketplace growth starting with declining and disappearing eligible participants and disposable income. Even for those assuming an unending lifestyle funded by passive income rents and inherited asset appreciation, this scenario becomes threatening over a rapidly approaching time-span (sellers dilemma when there are no more eligible buyers) although not comparable with day-to-day survival for America’s paycheck-dependent and on-demand working classes today and tomorrow. Studies prove a direct correlation between structural inequalities and actuarial table conclusions.

In “Political Party Meltdown,” author Kevin Baker writes that, “Today’s Americans are beginning to reject establishment narratives that accept what feels like permanent economic stagnation and foreign threats. They will not always be right, these new populists, and the solutions they advocate may be worse than the original problems. They may be prey for demagogues and false gods. But they have — some of them anyway — started to break out of the narrow, ideological spaces they had previously been confined in and may have taken a first, wrenching step toward restoring practical democracy.”

Political pundits talk about the “Trump-Sanders” preferred choices for angry voters (independents, Democrats and Republicans) willing to cross previously rigid political and ideological barriers to support the most “authentic brand” with any chance to prevail when faced with unsurmountable living proof of cultural disenfranchisement and no way out economics. The Clinton campaign is experiencing this in the pushback from younger female voters while proven establishment politicians on the Republican side are losing to “outsider” candidates.

David Brooks writes that, “First, the electorate has changed. Less-educated voters are in the middle of a tidal wave of trauma. Labor force participation is dropping, wages are sliding, suicide rates are rising, heroin addiction is rising, faith in American institutions is dissolving… what is emerging as the central dispute of our time — not between left and right but between open and closed.”

With tomorrow’s America on track to become a majority minority country during the first half of this century – economic and political divisions are exacerbated by rising and increasingly embedded structural inequalities that off-load social mobility, equal opportunity and the security of decent income expectations from the aspirational national table. What divides America socially, economically and politically is becoming increasingly resistant to superficial change and consequently dismissive of nuanced, traditional left versus right divisions and conventional micro and macro solutions already quickly losing relevance. Individual Americans’ accidents of birth are turning into guaranteed passports to open or closed pathways to middleclass prosperity to the point where enshrined inequality is achieving what Calvinist predestination could only imagine. 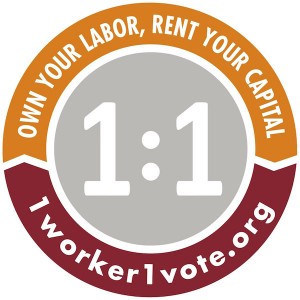 Whether recently minted “authentic” political campaign brands can deliver meaningful change remains to be seen.  Power has to shift from capital to labor, from shareholders to stakeholders, and from exterritorial decision-makers to local living communities and their economies.

Despite the best of political intentions, there is still no “free the people” lunch to enlarge America’s social, political, economic and cultural horizons.  Accrued power does not yield by itself but requires overwhelming momentum and rationale to convince through virtuous cycle metrics and authentic examples that “doing well by doing good” is not only possible, it is also more sustainably profitable.  Although such a process is beginning in many diverse and separated localities, economic healing opportunities benefitting marginalized Americans from all races cry out for an eclectic, nationwide ecosystem approach to connect the dots, build capacity, scale and transform based on more virtuous and less predatory capitalism models with a dedication towards absolute, irrevocable inclusion and backed up with documented results.

This process is in no way easy but it is possible.  Changing demographic impacts joined by rapidly spreading, no way out, vicious cycle poverty that does not match income with need requires new structural solutions combined with broadly accepted aspirational values.  Solutions no matter how brilliant without values no matter how inspiring will not work and the reverse is also true. Again, it’s not either-or, it’s both.

Mondragon-style cooperative worker ownership and inter-cooperating ecosystems of worker-owned and managed, profitable enterprises in local living economies represent one of the most researched and demonstrated, organic answers to elevating “the distribution and growth of personal income” by combining solidarity values with virtuous economy practices and results.  1worker1vote.org and the Cincinnati Union Cooperative Initiative (CUCI) are demonstrating how this is possible to replicate and scale in America.

Up Next: Chapter 3/3 Virtuous Cycle Metrics Will Combat Today’s Structural Inequalities Once Unleashed