The One & Only Leo Gerard

Leo Gerard retires in Pittsburgh, Pennsylvania, on Monday, July 15th, 2019, after 54 years as a union member and 18 years as the International President of United Steelworkers (USW).

The following is not an epitaph but a declaration:

“Bestowed with the common touch of someone who willingly lives his roots every single day, there’s not been a power-paradigm-photo of note involving organizing Labor in the corridors of political and movement greatness without Leo center ring during the past two decades.  Unmarked by pomp and unimpressed by Solomon’s glorifying raiment, Leo’s ability to inspire others, see around corners and organize over horizons is transforming the ways environmental, manufacturing, global trade, international labor coalitions, worker ownership and workplace democracy movements position themselves and scale. Co-creator and inspirational lodestone of the Apollo Alliance, the Blue Green Alliance, the Alliance for American Manufacturing, Unite the Workers, and 1worker1vote. Seeding the talent that resurrected Detroit during Obama One. The first  to call out neoliberal global trade structural fallacies before conventional wisdom poohbahs grasped the U.S. would hemorrhage over sixty-thousand factories.  Dedicating his life, literally,  to generations of workers with manufacturing and multiple productive skillsets in their DNA who were cut-off, cut-out, shorted and consigned to the collateral damage cutting floor by exterritorial financial and political labor-arbitrageurs leading up to the 2008 Great Recession and every day since. Calling out so-called creative destruction without any creative reconstruction for what it is: a greed-induced, self-serving crime against working class humanity masquerading as liberating innovation.  Leading the art of relentless coalition-building across borders, markets and silos on behalf of the working human, without regard to constraints of time, distance, and often personal health.  Reaching out over barriers and built-in prejudices to those on other  sides by stirring-up big, creative thinking movements but with personal magnetism serving the cause not the source.  Walking the talk on how authentic sweat equity and leadership by example can make actual deposits into the global stakeholder ownership account of a better shared future for both incoming and historically stranded “huddled masses yearning to breath free.” Devictimizing the politics of cruelty caused by unrestrained capitalism intentionally setting the world on fire. Leo comes from Sudbury, a city in Ontario, Canada, a place where the Apollo moon landing was practiced because the terrains are so similar. I know because he took me there in dead winter once upon a time to talk about the power of hope, aided by one-worker-one-vote economic democracy matching with organizing collective labor power to beat back desperation, destitution and the denigration of who we are meant to be”.  -MAP-

From The Soul Of A Union Man, by Leo Gerard 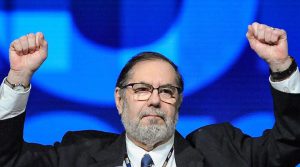 “I was raised in a company house, in a company town, where the miners had to buy their own oilers – that is, rubber coveralls – drill bits, and other tools at the company store. That company, Inco Ltd., controlled my hometown, but never succeeded in owning the souls of the men and women who lived and worked there. That’s because these were union men and women: self-possessed, a little rowdy, and well aware that puny pleas from individual workers fall on deaf corporate ears. As I prepare to retire in a couple of days, 54 years after starting work as a copper puncher at the Inco smelter, the relationship between massive, multinational corporations and workers is different. Unions represent a much smaller percentage of workers now, so few that some don’t even know what a labor organization is – or what organized labor can accomplish. That is the result of deliberate, decades-long attacks on unions by corporations and the rich. They intend to own not only workers’ time and production but their very souls. Now, for labor to secure gains, in the United States and everywhere in the world, workers must mobilize. We have to bring everyone together, women, men, poor people, people of color, gay people – all working people. None of us is big enough or developed enough to win this fight alone. If we fight together, I can’t guarantee we will win. But if we don’t fight for justice, I can guarantee we will lose. Since none of us is willing to owe our souls to the company store, we’re going to have to find ways to continue building coalitions robust enough to confront capital and win the battle for economic and social justice.”

The 1worker1vote movement is deeply honored that Leo will continue on the 1worker1vote advisory board together with incoming USW International President, Tom Conway.

← Are We All “Wee” Workers?
The U.S. Business Roundtable Is Born Again →