In Search of Better Pogo Angels 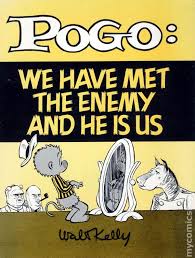 Pogo’s prophetic and pathetic observation holds: “we have met the enemy and he is us.” Today’s polarized and polarizing United States, under siege from itself, is proving too internally cowed, under-imagined and social media pigeonholed to buck predictable spheres of influence. More than just another rare bipartisan opportunity, getting worker ownership equations right could heal the breach between mutually-assured destructing left and right populism by empowering and freeing workers to think, act, provide, invest and vote for themselves.

Previous posts on this site allude to how ownership public policy needs to upgrade its act before engaging full bore under the bright klieg lights of nationwide scaling (see: Healing America’s Regressive Gene; The Bipartisan Future of Work; Ownership for All; Employee Ownership Needs Worker Owners). Individual workplace and community ownership – like every other foundational American impulse – desperately needs a vocabulary and vision overhaul based on proven experiences that sustain from an organic and fully inclusive ecosystem perspective. Ownership tools cannot themselves become vehicles to proliferate more gated privilege communities but instead must serve as the ubiquitous “lamp beside the golden door” for everyone regardless of race, color, creed, economic class, geography or immigrant status.

Bipartisan political support for nationwide community college worker ownership featuring “hands-on” and “learning by doing” curriculum with the potential of 50 million job-seeking, rising working class enrollees is a good place to start.  After two years of preparation, the 1worker1vote.org movement is launching a soft prototype this October as a measured step in this direction. Federal, state and local ownership policy convening is another imperative to grasp the widening differences between America’s worker and employee ownership populations (increasingly diverging as the “gig” economy consumes more of the country’s workforce) to better grow both.

The often heard, privilege-laden “excuse” as to why workers should not own a percentage or even an equity majority of the enterprises in which they work is based on a false premise that it’s detrimental and risky for workers to hold “all of their eggs in one basket.” Janis Joplin’s and Kris Kristofferson’s refrain that “freedom’s just another word for nothing left to lose” still holds true 48 years later. Redlined, embedded inequalities in America means over one-third of the country’s working class does not have access even to metaphorically owning either workplace “eggs” or a basket to put them in.

Fortunately, the follow-up question of which comes first, the ownership egg or the ownership basket, is becoming increasingly irrelevant given new socioeconomic model successes combining values, productivity, profitability and competitiveness (more examples: Los Angeles, Minneapolis, Philadelphia, Oakland, Richmond, Rochester, Madison and Cleveland). Highly referenced experiences such as Mondragon’s 60 years of industrial worker cooperative history cannot be exported wholesale but are being reimagined eclectically throughout the United States. Like Pandora’s box, Mondragon may not be fully applicable to all the great shambles of unraveling America’s work culture decay, but it does offer prototypes, templates, lessons learned, structural mechanisms, useful stories and most important: some hope.

The better angels of our unalienable rights nature have taken a very long lunch break and it’s time for them to get back to saving workplace souls. Kickstarting this process means becoming serious about bipartisan worker ownership policies and practices. Worker ownership metrics show higher productivity, resiliency, solidarity and local community reinvestment trends that can heal the country’s most broken places. Bipartisan worker ownership therapy with its inherent equity and participation ethos is poised to prevent further domestic cultural cardiac arrest resulting from an impoverished values diet, inadequate exercise in basic civics and a failure to reconnect with America’s aspirational history. Literally and figuratively, the worker ownership elephant and donkey own the opportunity economy room.

← Independence from Ourselves
Reimagining Humans Back into the Workplace Equation Center through Equity: 2017 Report Card →

9 comments for “In Search of Better Pogo Angels”